Overview: Stocks were mixed around the world last week, as international equities rose on the back of strong earnings, while U.S. stocks were lower in a volatile week of trading.  In the U.S., a consumer prices (CPI) report that showed high inflation, along with interest rate concerns, drove stocks lower, with the S&P 500 index ending the week -1.8% lower.  International stocks fared better, with emerging markets (MSCI EM) up 1.6%, and international developed stocks (MSCI EAFE), rising 1.4% for the week. In the bond markets, the 10-Year U.S. Treasury yield rose above 2% for the first time since 2019 before ending the week at 1.95%.  The U.S. headline CPI rose to 7.5% year-over-year in January, its highest level in four decades. Core inflation, which excludes the volatile food and energy components, was up 6.0% year-over-year, well above the Federal Reserve’s 2.0% long-term inflation target. This week we will get economic data points on producer prices (PPI), retail sales, industrial production, and housing.  PPI is expected to ease 0.3% from the prior month, to an expected core reading of 8.0% year-over-year.

More on inflation: (from JP Morgan) Last week’s CPI report for January came in stronger than expected, with the rate of headline inflation increasing to a 40-year high of 7.5% y/y (0.6% m/m). Prices rose across most sub-categories, but food, electricity and shelter costs saw particularly significant increases. Supply chain bottlenecks and the shortage in chips continue to limit the output of car manufacturers, putting additional upward pressure on both new and used vehicles prices which rose 12.2% and 40.5% y/y, respectively. In addition to rising consumer costs, the January employment report highlighted that firms continue to see higher costs in the form of wages. While inflation should gradually begin to moderate as a significant portion of the price increases are transitory in nature, wage growth will likely be stickier due to the economy’s chronic lack of labor. That said, there are signs that hourly earnings growth may have peaked and is now slowly returning to trend. According to NFIB’s January survey, 27% of small businesses intend on raising compensation over the next three months, down from the 32% recorded over the prior three months.

Despite the significant acceleration in wage growth and notably higher input costs, businesses have been able to preserve margins by passing along some of these costs to consumers via price increases. While this will contribute to the stickiness of inflation, it seems to have been effective in defending margins. In fact, with 80.8% of market cap reporting, we are currently tracking a 4Q21 operating margin of 13.2% for the S&P 500. If realized, this would only be 0.4% ppts below the 2Q21 peak of 13.6%, and potentially signaling that margins will be more resilient than expected. Furthermore, a faster than expected deceleration in wage growth could allow operating margins to continue surprising to the upside through the first half of this year. 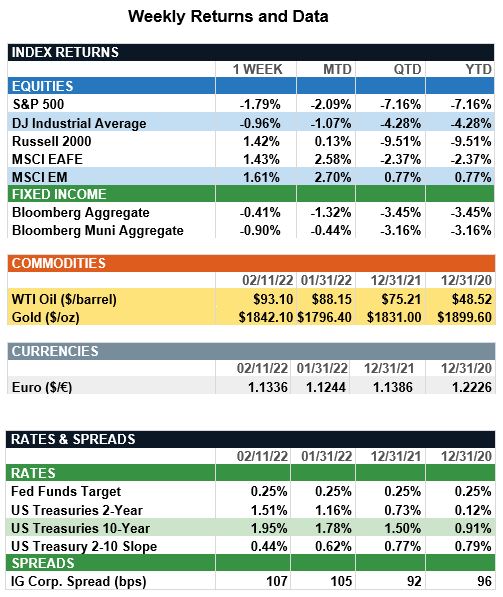