Overview: Stock markets were mixed last week, as the increase in the COVID-19 Delta variant took center stage and concerns around the global recovery emerged. The Delta variant now comprises a majority of new cases, and virus concerns led Japan to declare a state of emergency in Tokyo before the Olympics. In bonds, U.S. Treasury yields fell to the lowest level since February 2020. The 10-year Treasury finished the week at a yield of 1.36%, well below the recent high of 1.75% reached on March 31 of this year. For the week, the S&P 500 index managed a 0.4% gain, with international developed stocks unchanged. Emerging markets stocks were -2.6% lower for the week, driven by concerns about the pace of economic growth as the Delta variant emerges.

Upcoming: Key news to watch this week include the beginning of second-quarter earnings reports, along with testimony from Federal Reserve Chair Jerome Powell before Congress mid-week. Powell will be asked about Fed response to inflation concerns, with economic reports due on consumer prices (CPI) and producer prices (PPI) due on Tuesday and Wednesday respectively. On the political front, Congress returns today for three intense weeks of debate on infrastructure, 2022 spending, and the debt ceiling.

A Note on Manufacturing: (from JP Morgan) Coming off a record high in May, the J.P. Morgan Global PMI Composite Output Index fell 1.8 bps to 56.6 in June. Though the rate of expansion softened slightly, the index remains expansionary and is significantly elevated when compared to historical averages. The overall decline in the Global Composite PMI index was marked by regional nuances. Most influential were the dips in the U.S. and China PMIs, whereas the eurozone PMI continued on its upward trajectory. In the U.S., the Markit Composite PMI subsided from its record high of 68.7 in May to its second-best high of 63.9 in June. Both manufacturing and services components slipped in June as U.S. goods producers were hampered by significant supply delays and labor market tightness. China was also troubled by mounting supply pressures. China’s Caixin Composite PMI dipped 1.3 bps to 52.9 as a result. Beneath the hood, China’s manufacturing PMI retreated to 51.3, down from 52.0 in May, on softer output growth, which saw its weakest level since March 2020. China, once the early leader in the post-COVID-19 recovery, is now seeing its growth moderate and is passing the baton to the eurozone. Unlike the U.S. and China, the eurozone actually notched an increase in June with its Markit Composite PMI rising 2.4 bps to 59.5, just short of an all-time high. The strengthening of the eurozone index reflected the fastest month-over-month rise in 15 years for the services sector, a feat likely related to the region’s robust vaccination campaign and broader re-openings. As the eurozone gains momentum, it may be wise to be positioned in European equities that likely stand to benefit from the region’s comeback. 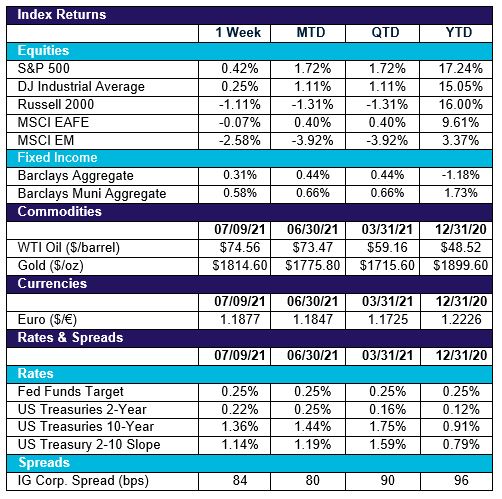 This communication is for informational purposes only. It is not intended as investment advice or an offer or solicitation for the purchase or sale of any financial instrument.Indices are unmanaged, represent past performance, do not incur fees or expenses, and cannot be invested into directly. Past performance is no guarantee of future results.