Overview: Stocks around the world traded lower last week, as COVID-19 concerns continue and after the Federal Reserve indicated it may accelerate the timing of the tapering of asset purchases. The July Federal Open Market Committee (FOMC) meeting minutes signaled the Fed may begin scaling back asset purchases by year-end, earlier than expected. However, market reaction to this may be limited by a supportive economic backdrop and transparent policy guidance, as investors evaluate uncertainty around the Delta variant. Ongoing monetary and fiscal stimulus has provided key support for the markets, so any changes to the policy may lead to market volatility. In bonds, U.S. Treasury yields fell despite the Fed’s tapering talk amid the Delta variant concern. The 10-Year yield ended 4 basis points lower at 1.26%, down in yield from 1.75% at the end of March of this year. Focus in the bond markets this week will be on personal consumption expenditures (PCE) data which will be released on Friday. The PCE is the Fed’s preferred measure of inflation. Headline PCE is expected to be 4.1% annualized, with the core number (excludes food and energy) consensus at 3.6%. In addition, investors will look for policy clues coming out of the 2021 Economic Policy Symposium in Jackson Hole, Wyoming, titled “Macroeconomic Policy in an Uneven Economy”.

Fiscal Policy update: The ongoing violence in Kabul should provide a litmus test for the current administration, with a key vote scheduled today in the House of Representatives on infrastructure bills. At stake from  a market perspective is the status of the $1.2 trillion infrastructure bill that has been passed by the Senate, along with a resolution that would authorize the reconciliation process for a second bill, calling for $3.5 trillion in social spending. Progress for these spending bills, along with a debt ceiling hike, will be important to watch, as continued fiscal support has helped drive the markets.

A Note on the Consumer: (from JP Morgan) According to the University of Michigan Consumer Sentiment survey, consumers are now the least confident they have been not just throughout the pandemic, but also in the last decade. July’s preliminary 70.2 print marks a 13.5% m/m and 5.3% y/y decline. This drop may be overstated as this month’s survey rests on a very small sample of roughly half of its normal full month 500 respondents. Furthermore, because the survey was conducted in early August it won’t reflect recent events such as the depressing exit from Afghanistan and some of the uptick in Delta variant cases.  While these events may dampen the public mood in the short run, this fall in confidence will likely be temporary. In the long run, it is usually not shocks that influence consumer sentiment the most, but rather four fundamental factors – unemployment, home prices, stock prices, and inflation. Of these, unemployment is the most influential, explaining 55% of the variance in consumer sentiment over the last 25 years. The July JOLTS report showed a remarkable 1.3M more job openings than unemployed Americans – a factor that should push unemployment down and boost sentiment in the months ahead. Looking ahead, while the direction of stock and home prices is uncertain, unemployment is likely to fall further and inflation should moderate. Consequently, while American consumers are experiencing the summertime blues now, sentiment should rebound later in the year. 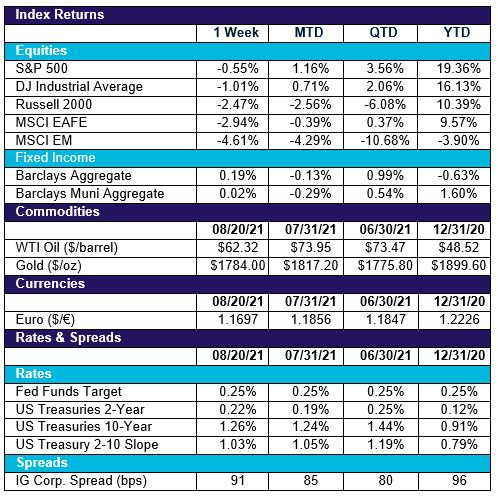