Overview: Stocks around the world finished higher last week, led by emerging markets (MSCI EM) up 3.4%. In the U.S., the S&P 500 index reached a new high, ending the week 0.6% higher. The S&P index was up almost 3% in total return in August, recording the seventh consecutive positive return month for this indicator. Declining unemployment rates, ongoing fiscal stimulus, and hope for transient inflation have supported investor optimism that economic recovery will continue. In bonds, interest rates were steady, with the 10-year Treasury finishing the week at 1.32%. U.S. jobless claims fell to a new pandemic low of 340,000, and the unemployment rate fell to 5.2%, both supporting the ongoing jobs recovery, despite the fact the economy added just 235,000 new jobs, a sharp decrease from the revised total of 1,053,000 in the previous month’s report.

Update on the Consumer: (from JP Morgan)  Heightened pandemic concerns and rising prices have weighed on consumer confidence, with the consumer confidence index falling to a six-month low of 113.8 in August. This follows an even sharper decline in the University of Michigan’s consumer sentiment index, which plunged to its lowest level in more than a decade. These readings are important for investors, as consumer spending accounts for more than two-thirds of GDP and has powered the economic rebound so far. Further, when thinking about consumer behavior, it’s worth noting that the Conference Board survey showed a rotation in spending from goods to services is underway, with fewer households planning to buy a home and big-ticket items like cars and appliances but more planning to go on vacation. In addition, while the August jobs report showed limited payroll gains, it still suggested strong demand for labor with robust wage gains. Labor market tightness is further corroborated by the NFIB survey reporting a staggering 50% of small businesses with unfilled job openings. This, along with an easing of pandemic worries and receding inflation pressures should allow consumer confidence to rebound in the coming months, supporting consumer spending. While we may still see the economy lose some steam in this recovery, a little sobriety in the reopening exuberance is not necessarily a bad thing as it reduces the risk of an overheating economy, and thus the urgency for the tighter policy conditions which have the potential to end the expansion.

Upcoming: In a light week for economic data, producer price (PPI) data will be released on Friday, with the expectation for core numbers to show an increase of 0.5% for August, and 6.6% annualized. Markets will be watching inflation indicators closely, along with any actions from the Federal Reserve. The Fed still seems on track to taper asset purchases by year-end, however, disappointing jobs data may delay the timetable. Ongoing fiscal stimulus and the fate of the outstanding spending proposals will remain front-and-center. Both the $1 trillion infrastructure bill and the $3.5 trillion social spending package are not fully paid for, and resolution of how they will be funded and if they will be enacted in their present form will be of interest to investors. 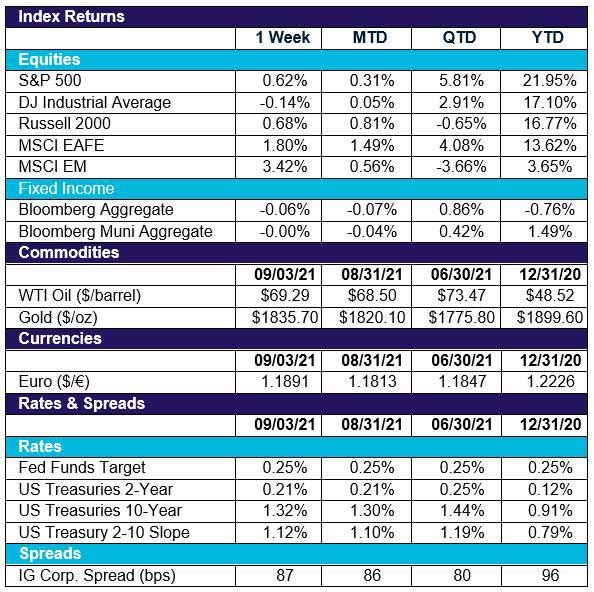