Overview: Stocks around the world traded lower last week as investor concerns grew over higher inflation, rising energy prices, slowing growth, and rising interest rates. The S&P 500 Index ended the week  2.2% lower and fell 4.8% in the month of September. This broke a seven-month winning streak for the S&P 500 and was the worst monthly return for the index since March 2020. International stocks were lower as well, with international developed (MSCI EAFE) down 3.1%, and emerging market stocks (MSCI EM) lower by 1.4% for the week. Energy prices were higher on the week, as oil prices rose on increased Chinese energy demand and an increase in U.S. crude oil inventory. The benchmark WTI Brent crude oil rose for the sixth consecutive week, closing at $75.88 per barrel, up 57% year-to-date. In bonds, U.S. Treasury yields have risen to the current level of about 1.48% from recent lows of 1.18% in late August. Concerns about inflation and the Federal Reserve’s accelerating plans to  taper the current $120 billion per month asset purchases have helped to push yields higher. This week, markets will be focused on political developments, as Congress works on the infrastructure and social spending bills with an impending deadline to raise the debt ceiling looming. Economic data will be highlighted by the U.S. employment report on Friday, where the consensus is for 475,000 new jobs for September, with the unemployment rate expected to fall from 5.2% to 5.1%.

A Note on Interest Rates: (from JP Morgan) The forward USD overnight index swap (OIS) curve is a commonly used proxy for the market’s expectation of where the federal funds rate is headed. The OIS curve exhibited little movement following the Fed meeting on Sept. 22; however, a few days later, on Sept. 28, the OIS curve steepened more meaningfully. That same day, the 10 year Treasury yield closed at 1.54% – its highest level since June. This steepening is the product of a confluence of recent developments. At its core, the move may be a delayed reaction to the Fed meeting last week, which provided greater clarity on the Fed’s expected plans to taper bond purchases and eventually increase short-term rates. We saw inflation breakevens (i.e., the gap between nominal yields and TIPS yield) also move up a bit, signaling that investors may be expecting some stickier inflation. Second, it’s not just the Fed, but other central banks are also on the move. Norway’s Norge Bank became the first G10 central bank to hike, joining a number of EM central banks already hiking (i.e., Brazil, Mexico, Russia). Another development that drove up yields was an easing of worries surrounding Chinese real estate developer, Evergrande. While the issue is not yet resolved, fears over a “Lehman moment” have subsided. Together, these factors may have contributed to the rise in yields. On balance, we expect long-term interest rates to rise further, reflecting a reacceleration in global growth, which should present an opportunity for cyclicals to outperform. 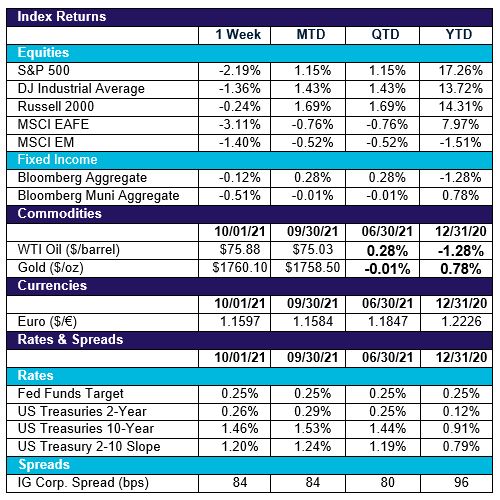