Overview: Stocks around the world ended an uneven week of trading with mixed returns, as international stocks fell and U.S. stock returns were marginally positive. In the U.S., the S&P 500 index ended the week 0.4% higher, as strong retail sales and labor data offset inflation and Federal Reserve policy concerns. In economic data, U.S. retail sales rose by a greater-than-expected 1.7% in October, reflecting robust spending despite rising prices and constraints in supply chains. The labor recovery continues, with U.S. initial jobless claims lower for the seventh week in a row. Initial jobless claims of 268,000 mark a new pandemic-era low. In bonds, U.S. Treasury yields were steady the past week, as this strong economic data reflecting strong consumer spending and improving labor conditions were offset by speculation around Fed policy and the choice of the new Fed chair by President Biden. The 10-year Treasury finished the week at 1.53%, as interest rates continue to trade in a narrow range over the past couple of months.

Upcoming this week: Key news for the markets as of this Monday morning is that President Biden has selected Jerome Powell for a second four-year term as the Federal Reserve chair and has nominated Lael Brainard to vice-chair. We believe this will be viewed positively by the stock markets, as it maintains policy continuity as the Fed moves toward normalization over the next few years. Market participants will now watch for any indications that the Fed will increase the rate of tapering in its asset purchase program or change the timing of interest rate hikes that are expected to begin later next year. As inflation remains a concern, the personal income and outlays report reported on Wednesday will be of interest. This report includes data on personal consumption (PCE) which is the preferred measure of inflation for the Fed. The headline PCE price index is expected to rise 0.6% for the month and 5.0% on an annualized basis. Investors will be looking for signs of easing inflation (see next section) and any direction from the Fed before their next scheduled meeting on Dec. 14-15.

Update on Inflation: (from JP Morgan) Inflationary concerns has been further exacerbated by the October CPI report, which showed headline consumer prices increased 6.2% y/y – the fastest growth in prices since 1990. However, economic data released early last week suggests that some of these inflationary pressures may begin to ease next year. There has historically been a tight relationship between profit growth and investment spending (CAPEX) a year later; since the start of the year, we have seen strong profit growth as the economy recovered from COVID-19, with S&P 500 EPS growing 143% y/y in 1Q21, 94% in 2Q21 and currently tracking a 38% y/y increase in 3Q21. 1Q21 was the first quarter of positive earnings growth since the start of 2020, suggesting that capital expenditures should accelerate into 2022 and potentially lead to increases in productivity and output. This thesis was further supported by the jump in industrial and manufacturing production during the month of October. Although the Fed estimated that about half of the gain was a recovery from the effects of Hurricane Ida, non-vehicle production was still solid, suggesting that business investment is beginning to accelerate. This aligns with management commentary during 3Q21 earnings calls, which suggested margin pressure may begin to fade in 2H22 as an investment in production allows for a subsequent improvement in productivity. 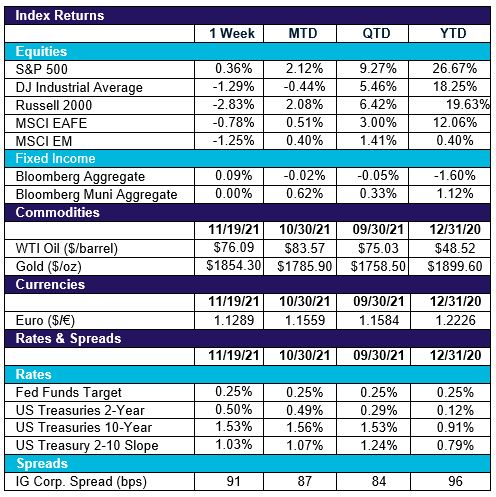