Stocks fell across the globe last week as actions by central banks across the world drove market volatility. In the U.S., the S&P 500 index ended 2.1% lower as markets digested the news from the latest Federal Reserve meeting. The Fed delivered a 50bp (0.50%) rate hike for December and raised its projection for the peak Fed funds rate by 50bp to 5.00-5.25%. Fed officials indicated the committee will only cut when it is confident inflation is moving down “in a sustained way.”

In Europe, the European Central Bank (ECB) raised the benchmark deposit rate 50bp to 2% as officials signaled the need for significant future rate hikes, suggesting 50bp hikes for a period of time. International stocks performed similarly to the U.S. for the week with international developed (MSCI EAFE) and emerging markets (MSCI EM) both down about 2.1% for the week. In the bond markets, U.S. Treasury yields were lower with the 2-Year and 10-Year Treasury yields finishing the week at 4.18% and 3.48%, respectively.

A better-than-expected November U.S. inflation report showed the possibility of lower expectations for monetary policy tightening in the year ahead. The Consumer Price Index (CPI) came in below expectations for the second consecutive month and reinforced the turning tide on inflation as nearly every major category showed easing price pressures. Headline inflation rose 7.1% year-over-year, below consensus expectations of 7.3%. Prices for energy and core goods contracted, while services ex-shelter inflation decelerated. Investors hope inflation will continue to trend down in the months ahead given easing supply constraints, cooler demand, and lower commodity prices. Further data on inflation will be reported on Friday, Dec. 23, in the form of the personal income and outlays report. This data includes the PCE Price Index, the Fed’s preferred measure of inflation. The headline PCE Price Index is expected to fall from 6.0% in October to 5.5% in November.

Update on the Final Stretch of the Year (from JP Morgan): As we enter the final stretch of the year, the U.S. economy is running on low gas against strong headwinds. Economic data this week showed a picture of declining industrial production, manufacturing and services PMIs, and retail sales. Despite another cooler-than-expected inflation print, the Fed delivered hawkish messaging at its December FOMC meeting, downplaying recent progress on inflation, and maintaining its higher-for-longer stance on monetary policy. In its updated Summary of Economic Projections, the Fed now sees inflation elevated for longer, growth cooling further and unemployment rising. The outlook laid out by the Fed is perplexing; both inflation and labor markets are showing clear signs of cooling, wage growth is softening, and shelter inflation should peak early next year. Notably, Fed Chairman Jerome Powell has referenced core services ex-shelter inflation as failing to show signs of progress on multiple occasions. While this measure of PCE inflation is not produced by the BEA, we attempted to construct Powell’s series ourselves. Including inflation data for November and our own estimates of December, we see core services ex-housing is indeed coming down. While it still remains elevated to historical trends, receding wage pressures, lower input costs and slowing aggregate demand should induce further declines in 2023. Investors were reminded to “not fight the Fed” after Powell’s speech with markets reversing gains from earlier in the week, and we heed this warning as well. Ultimately, it’s clear the committee is laser-focused on achieving 2% inflation and its emphasis on lagged inflation data means a Fed pivot may be further out than initially anticipated, narrowing the window for a soft landing further. 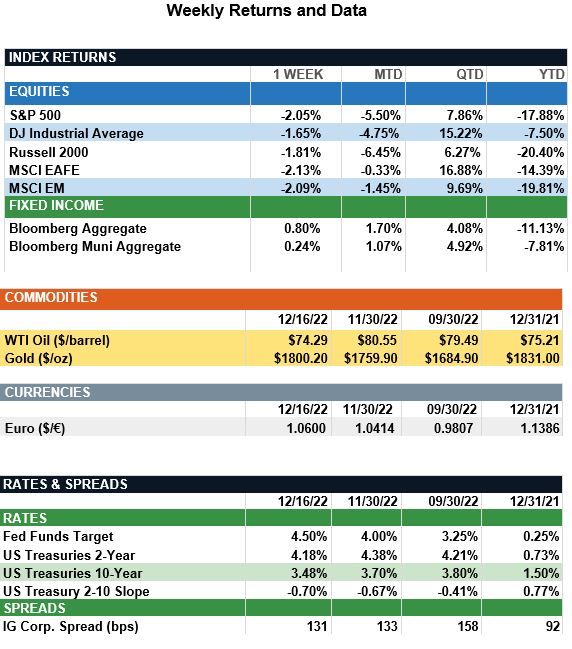