Overview: Stocks around the world were largely unchanged last week, after a strong first half of November. In the U.S., the S&P 500 index was down 0.6% for the week as an early week rally stalled after Federal Reserve officials suggested interest rates would have to be raised further to bring down inflation. International stocks continued their positive run, with international developed stocks (MCSI EAFE) and emerging markets (MSCI EM) up 10.0% and 11.2%, respectively, in November. In the bond markets, continued worries about inflation and recession led to an increased yield curve inversion, with the 2-year and 10-year Treasury yields closing the week at 4.51% and 3.82%, respectively. The current yield inversion between the 2-year and 10-year notes is now 0.69%, a level not seen since 1982. There were signs of easing prices last week as oil prices continued to decline with benchmark WTI oil finishing the week about $6.50 per barrel lower at $80.08. OPEC has revised their forecast for global oil demand lower for the fifth time since April, noting uncertainties associated with Chinese demand and the overall global supply outlook. In addition, producer prices (PPI) increased 0.2% in October, against expectations of 0.4%. This suggests evidence that  price pressures may be continuing in their downward trend, with service prices falling for the first time in almost two years.

Update on Consumer Spending (from JP Morgan): While higher inflation might be pinching consumer wallets, recent economic data still point to a resilient consumer. As Americans head to the grocery store this week to stock up on ingredients, they may be frustrated to discover the cost of a Thanksgiving dinner is a whopping 20% higher than last year, according to a survey by the American Farm Bureau. Following upward revisions to prior months, retail sales jumped by 1.3% in October and on an inflation-adjusted basis, sales still rose by 0.8%. The retail sales control group, which excludes sales on gas, food, autos, and materials, also rose a solid 0.7%. Last year, consumers shopped early and spent more to secure gifts as stores struggled to keep shelves stocked amid shipping delays. This year, major retailers are sitting on excess inventories and potentially facing a more conservative consumer. However, while consumers may be running down their excess savings from the pandemic, down from a peak of $2.0tn to $1.0tn as of September, softening inflation and low unemployment should lift real wage growth and consumer sentiment in the months ahead, supporting overall consumer spending. Price discounts from major retailers also may help lure consumers back to the storefronts this season. We still anticipate a consumer squeeze in 2023, given a very low personal savings rate and climbing consumer credit balances, but Americans should be able to eat, drink and be merry – at least for the next few months. 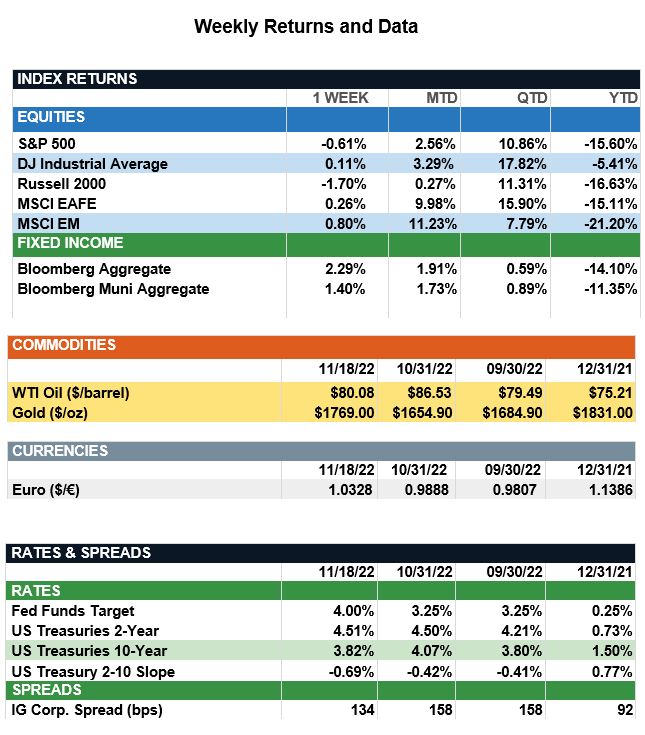