U.S. stocks traded higher in the holiday-shortened week as investors hope for a slower pace of rate hikes from the Federal Reserve. The November Federal Open Market Committee (FOMC) minutes released last Wednesday suggested that although inflation remains high, a slower pace of tightening would likely soon be appropriate. According to FedWatch, futures markets are now pricing in a 70% probability of a 0.50% rate hike at the next Fed meeting to be held Dec. 13-14, with the peak in funds rates now expected to reach around 5% late next Spring. In the U.S., the S&P 500 index was up 1.6% for the week. International developed stocks (MSCI EAFE) also were higher after a key production managers’ (PMI) report showed economic contraction is easing in the Eurozone. In the bond markets, interest rates on both the 2-year and 10-year Treasury notes fell to 4.48% and 3.70%, respectively, leading to positive returns in both taxable and municipal bonds for the week. The broad-based bond indexes now are up between 3.5% and 4.0% for November. In economic news, key reports due out this week will provide clues to the status of inflation and the strength of the labor markets. On Thursday, Dec. 1, the personal income and outlays report will be released. The report includes the Fed’s preferred measure of inflation, the core PCE Price index, which is expected to fall from 5.1% in September to 5.0% in October. The following day we will get the monthly U.S. employment report. Nonfarm payrolls are expected to increase by 200,000 workers month over month (down from 261,000 the prior month) with the unemployment rate to remain steady at 3.7%.

Update on the Economy (from JP Morgan): We recognize the headwinds to the economy next year but expect consumer spending will be able to grow at a gradual pace as incomes are supported by government spending and a tight labor market. Headlines have been dominated by the better-than-expected October CPI report, but this improvement in inflation likely will be overshadowed by a deteriorating growth outlook in the coming months. Looking at the basic building blocks of gross domestic product (GDP), we see weakness across a variety of sectors, with homebuilding set to slow significantly and higher rates to weigh on inventories, business investment and exports. That being said, we do expect the economy to find some near-term support from consumption, which accounts for 68% of GDP. The key driver of consumer spending is disposable income, which over the last two years has been boosted by fiscal stimulus and the surge in payroll employment. With the former completely gone and the latter fading as the demand for labor wanes, slower growth in disposable income combined with a negative wealth effect look set to weigh on overall spending. However, these headwinds should be partially offset by the 8.7% Social Security cost-of-living adjustment eligible consumers will receive next year. This adjustment is the highest increase in 40 years and comes on the heels of record levels of inflation over the last 12 months. Disposable income also should be buoyed by the Biden Administration’s decision to extend the student loan moratorium to June 30, 2023, if no resolution is reached on the loan forgiveness lawsuits. 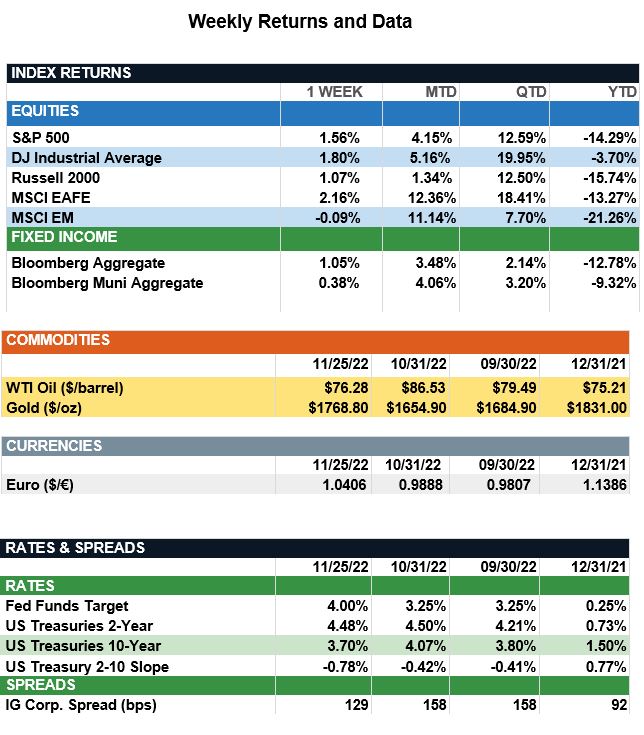