Overview: The January rally for U.S. stocks was put on pause last week as investors digested a plethora of earnings reports and economic data. The S&P 500 finished the week 0.65% lower, while international developed and emerging market stocks managed to post small gains for the week of 0.01% and 0.64%, respectively. Meanwhile, bonds continued their strong run last week with the Bloomberg Aggregate index rallying 0.15%. The taxable bond index is nearly 3% higher so far this year, reflecting falling rates across the yield curve as investors bet the Federal Reserve will slow the pace of rate hikes. In commodities, oil prices finished the week higher as well, following improved demand expectations from the International Energy Agency on the heels of China’s reopening. On the data front, U.S. wholesale prices (as measured by the U.S. Producer Price Index) fell 0.5% in December, the largest monthly decline since April. Retail sales fell 1.1% in December, reflecting a lackluster holiday shopping season. The labor market continues to remain a bright spot for the economy, as weekly jobless claims in the U.S. unexpectedly fell by 190,000 in the week ended Jan. 14. Looking ahead, markets will be focused on a number of economic reports as well as key earnings from several market heavyweights such as Microsoft, Johnson & Johnson, and Tesla. This week also brings the first estimate of fourth quarter GDP on Thursday as well as the personal consumption expenditures price index on Friday, a closely following measure of inflation.

Update on the Consumer (from JP Morgan): While markets have been fairly resilient at the start of the year, recent economic data have pointed to further weakening in the economy. Overall and core retail sales (excluding autos, gas and food) fell sharply in December, and while poor weather conditions may be partly to blame, the data suggest consumers were much more reserved in their spending during the holiday season. Other indicators, such as manufacturing PMIs, industrial production, and regional Fed surveys, also showed declining momentum in December. With back-to-back declines in both nominal and real core retail sales, there is a clear softening in the underlying trend for consumers. This is important because consumption represents the lion’s share of the U.S. economy, suggesting economic growth may be on tough footing as we start the year after our estimate of slightly over 2% annualized growth in the fourth quarter.

However, a boost to Social Security payments associated with the annual cost of living adjustment in January should meaningfully lift incomes and spending. Moreover, with an inflation downdrift firmly underway, consumers should see a welcome boost in their real personal income in 2023. Real-time data on the labor market also point to continued resilience, with initial jobless claims surprising to the downside this week and continuing jobless claims only modestly grinding higher. With a still-tight labor market and expectations for rising real income in the coming months, it’s not clear the economy is headed toward recession just yet. 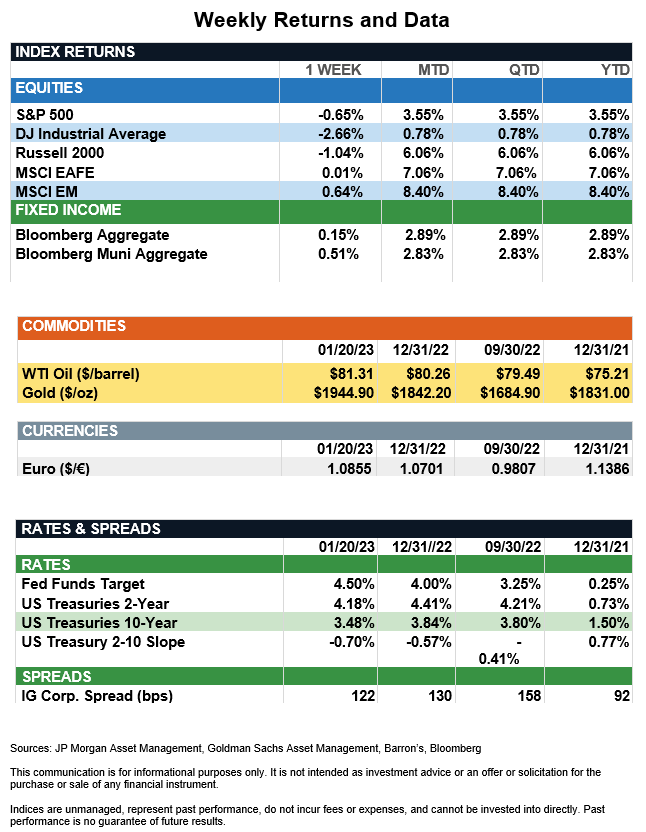