Overview: U.S. stocks and bonds fell last week as consumer prices (CPI) inflation reached a 40-year high and investors factored in the impact on global growth of Russia’s invasion of Ukraine. In the U.S., the S&P 500 index ended last week 2.8% lower. Bonds traded lower, as well, with the taxable and municipal Bloomberg bond indices down 1.7% and 1.1%, respectively, as interest rates rose, and risk premiums increased. U.S. headline consumer prices (CPI) rose to 7.9% year-over-year in February, increasing 0.4% from the prior month. Oil prices have increased about 45% since the start of the year, with the average price of a gallon of regular gas now $4.33, up 24% from a month ago (gasprices.aa.com). This week, investors will look for market direction from the Federal Reserve with the policy meeting scheduled for Tuesday and Wednesday (March 15-16). The Fed is expected to raise short-rates 0.25% (25 bps) at the meeting. Futures markets are now pricing in a mean of seven rate hikes by the end of this year, which would translate to a 1.75-2.00% federal funds rate at the end of 2022.

Inflation and Sentiment (from JP Morgan): The February CPI report showed consumer inflation running at its fastest pace in 40 years as surging energy prices boosted inflation, even prior to Russia’s invasion of Ukraine. Perhaps unsurprisingly, record-high fuel prices, rising interest rates, and the crisis in Ukraine caused consumer sentiment to fall. The University of Michigan’s survey showed sentiment falling to 59.7 in the early weeks of March, its lowest level since 2011. Also notably, consumers’ one-year inflation expectations rose to 5.4% from 4.9%, the highest level since the early 1980s.

Consumer sentiment is often regarded as a key driver of consumer spending since consumers might hold back on purchases in anticipation of a worsening economy or their own personal finances. However, for much of the pandemic, consumer spending remained robust amidst somber sentiment. Though consumers might not feel great about rising prices, so far this has not impacted their spending. With that said, it may be that the recent record fuel prices begin to take a toll on consumer wallets soon, and we estimate if current fuel prices were sustained, this could add more than $1,000 in annual expenses for the average household. For investors, it’s also interesting to note that troughs in consumer sentiment typically have preceded great equity returns. Of course, confidence is not the only piece of the puzzle, as returns also will be driven by fundamentals and valuations. However, history does suggest that panicking when people don’t feel great is usually a losing investment strategy. 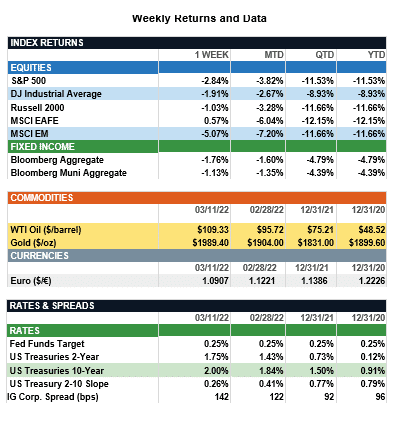