Overview: Stocks fell across the globe last week on fears of faster rate hikes in the U.S. and renewed lockdowns from a recent COVID-19 surge in China. In the U.S., the S&P 500 index ended down 2.7%, and with the Hang Seng index in Hong Kong down 4.1%, emerging market stocks were down 3.3% overall for the week. In bonds, the 10-Year US Treasury yield reached its highest level in three years, ending the week 20 basis points higher (0.2%) at a yield of 2.91%. The 2-year Treasury rose as well, finishing the week 27 basis points higher at 2.72%. The recent rise in yields has been driven by concerns over inflation leading to faster rate hikes. Markets still are reacting to the March inflation numbers, as the U.S. March consumer prices (CPI) and producer prices (PPI) recorded the biggest increases in years. In economic data, U.S. initial jobless claims fell to 184,000 for the prior week, reaching their lowest levels since the 1960s as the labor markets continue a strong recovery. Looking ahead, focus this week will be on the initial reading for first-quarter GDP, due out Thursday with an expectation of 1.1% growth for the quarter. Earnings also will be in focus this week. The upcoming week is the busiest for first-quarter earnings and will include reports from big technology companies such as Microsoft, Google, Facebook, Apple, and Amazon.

Update on Earnings (from JP Morgan): With 22.0% of market cap reporting, 1Q22 S&P 500 operating earnings per share (EPS) currently are tracking at $51.30. If realized, this would represent a y/y increase of 8.2% and a q/q contraction of 9.5%. Both are an improvement from the start of the quarter when we were tracking a y/y increase and q/q decline of 7.2% and 10.4%, respectively. Much of this has to do with financials. Of the 32 financials that have reported earnings, 72% have beaten estimates. Yet despite the decent beat figure for financials, the sector as a whole still is tracking a y/y decline. Results have been hampered by huge loan loss reserve releases this time last year, a drop-off in mortgage and capital markets activity and higher noninterest expenses due to rising compensation and continued business-related investments. Additionally, given the uncertain economic backdrop over the next 12-months, some banks even built up provisions for losses in 1Q22, which acted as another drag on profitability. In the industrial sector, many of the U.S. airlines reported results last week. While they still remain unprofitable, most, if not all, expect to record a profit in 2Q22 on the back of robust travel demand offsetting increasing expenses. A common theme in earnings so far has been the continued focus on margins, particularly on how companies will preserve profitability in the wake of surging costs. While many consumer discretionary names have benefited from price hikes, companies within the sector now are acknowledging cost pressures could dent margins going forward as they lose pricing tolerance from consumers. More broadly, margin resilience will be key if earnings are to grow in 2022, but clearly defending margins will require a combination of higher prices as well as a focus on efficiency. 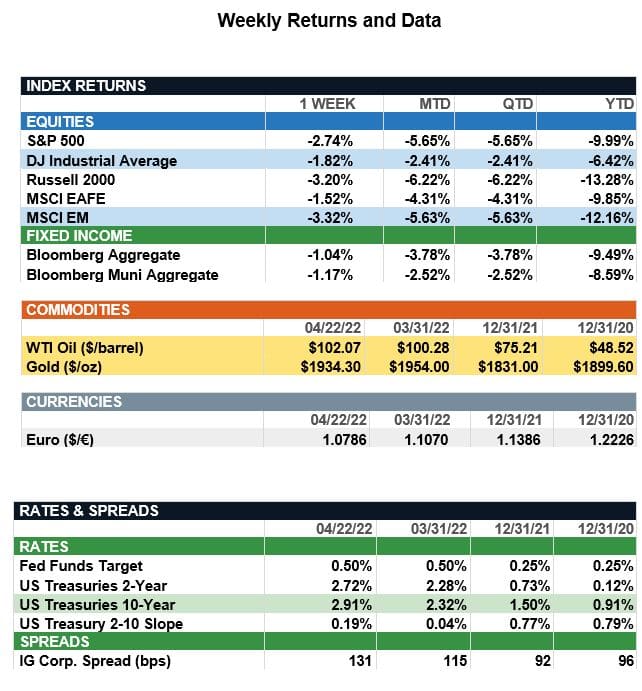