Overview: Stocks were lower in volatile trading last week as markets evaluated earnings, COVID-19 lockdowns in China, and Federal Reserve actions. In the U.S., the S&P 500 index was down 3.3% for the week as weak GDP data and concerns over China and the Fed outweighed generally positive earnings reports. In bonds, worries of an economic slowdown and ongoing inflation led to lower interest rates for the week, with the 2-year and 10-year Treasuries ending the week at 2.70% and 2.88%, respectively. Economic data showed the U.S. economy declined by 1.4% in the first quarter of 2022, versus a consensus of a positive 1.1% GDP growth expectation. Despite the negative number, GDP data was influenced by increased imports and lower inventories given strong domestic demand. This would suggest economic strength and persistent negative growth is unlikely as we move through 2022. On the inflation front, the Fed’s preferred measure of inflation, the U.S. Core Personal Consumption Expenditures (PCE) index fell to 5.2% from 5.3% in the previous month. This marks the first decline in Core PCE in over a year and gives investors hope that inflation may have peaked.

Update on Growth (from JP Morgan): The U.S. economy contracted by an annualized 1.4% in Q1, well short of consensus expectations for a 1.0% expansion. This follows a positive surprise in the fourth quarter, which showed a boomy 6.9% annualized growth rate. The first quarter’s dismal headline rate masks some positive underlying dynamics in the economy. The average growth rate between 4Q21 and 1Q22 was 2.7%, which is likely a better measure of the true momentum in the U.S. economy. In the first-quarter report, weakness was primarily due to the notoriously volatile inventory and trade sectors. Trade subtracted 3.2% from overall GDP growth as exports fell sharply and imports soared. While the trade deficit detracted from real GDP in the first quarter, it does reflect a U.S. economy with significantly stronger domestic demand than the rest of the world, a testament to the strength of the U.S. consumer. This was apparent in real consumer spending, which grew by 2.5% ann. in the fourth quarter, 2.7% ann. in the first quarter, and was the largest positive contributor to Q1 GDP. Real private inventories grew by a solid $158.7Bn annual pace; however, this came below the record high in 4Q21, thus detracting slightly from GDP. Overall, while we believe economic fundamentals are healthier than the GDP print suggests, it’s clear the economy is running out of room to grow. This may signal increased economic fragility and raises the risk the Fed’s expected rate hiking cycle could tip the economy into a recession. 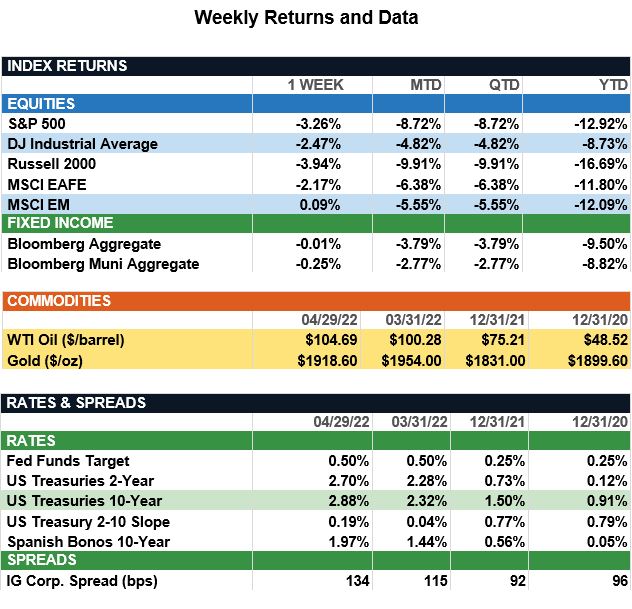 Sources: JP Morgan Asset Management, Goldman Sachs Asset Management, Barron’s, BloombergThis communication is for informational purposes only. It is not intended as investment advice or an offer or solicitation for the purchase or sale of any financial instrument.Indices are unmanaged, represent past performance, do not incur fees or expenses, and cannot be invested into directly. Past performance is no guarantee of future results.