Overview: Stocks were lower across the globe last week as central bank tightening amid persistent inflation and pricing pressures continued. In the U.S., the Federal Reserve raised the short-term funds rate last week by 75 basis points (0.75%), the largest increase since 1994, to a range of 1.50-1.75%. The Fed has demonstrated a strong commitment to fighting inflation and is likely to raise rates another 75 basis points at their next meeting in July, with the ending funds rate now expected to reach the 3.5% range by year-end. Plans for aggressive monetary tightening and a reduction of the Fed’s balance sheet has driven all Treasury yields higher, with the 2-year and 10-year Treasury notes closing the week at 3.17% and 3.24%, respectively, both up in yield about 60 basis points (0.60%) since the beginning of June. For the week, the S&P 500 index finished the week 5.8% lower, with international stocks down about 4.5%.

Update on Inflation (from JP Morgan): At its June meeting, the Federal Open Market Committee (FOMC) voted to raise the Federal funds target rate range by 0.75%. The message from the committee is clear – the Fed will expeditiously raise interest rates given it is “strongly committed” to tame inflation. While the Fed believes it can be successful in its efforts without tipping the economy into recession, this week’s actions clearly increase the risk of a recession starting later this year or in 2023.

Relative to their mid-March forecasts:

These revisions largely reflect the evident persistent inflationary pressures and to some extent the first-quarter slide seen in both real GDP and productivity. While the labor market continues to expand and growth is expected to recover through the middle of this year, the committee recognizes the aggressive path of rate hikes will cool demand for labor and act as another drag on the overall economy into next year. For investors, the Fed has laid out a hawkish path for rate increases with the intent to front-load rate hikes. With such aggressive tightening this year, recession risks have risen further in 2023. To be clear, the Fed could avoid a recession; however, the runway for a soft landing is much narrower than it was just a few weeks ago. 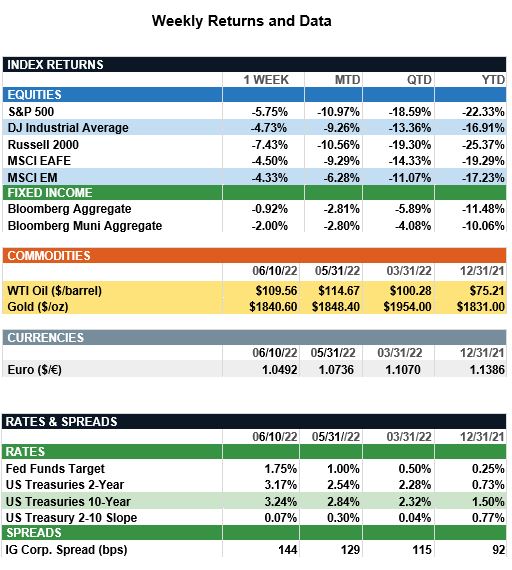