Overview: Global stocks traded higher last week, led in the U.S. by the 2.1% return of the S&P 500 index. Despite expectations for ongoing tighter monetary policy, easing oil prices and some positive signs for economic growth helped stocks finish in positive territory. Average regular gas prices finished the week at $4.68 per gallon, down from the all-time high of $5.01 per gallon June 14 (source: AAA) as WTI crude oil prices declined to $104.79 / barrel. In bonds, the U.S. 2-Year and 10-Year Treasury yields rose to 3.12% and 3.10%, respectively, as a strong employment report suggested the Federal Reserve will continue to aggressively raise rates. According to the CME FedWatch data, markets now are pricing in more than a 90% probability of a 75-basis point (0.75%) rate hike at the Fed meeting July 26-27.

Update on the Labor Market (from JP Morgan): The June jobs report painted a picture of consistency and strength in the labor market. The U.S. economy added 372K new jobs, remaining in line with the 383K average monthly gain over the past three months. Job growth was widespread, boosted by education and health services (+96K), professional and business services (+74K) and leisure and hospitality (+67K.). We also saw employment in manufacturing (+29K) return to its pre-pandemic levels. The unemployment rate extended its streak of 3.6% for the fourth consecutive month as the number of unemployed Americans stayed nearly unchanged at 5.9M. The labor force participation rate also remained quite steady at 62.2% vs. 62.3% in May. Wage growth continues to cool modestly with average hourly earnings rising by 0.3% after a 0.4% climb last month. At a time when recession speak dominates investment conversations, the consistent strength in the U.S. labor market should be viewed as a bright spot. It is an important tailwind for the U.S. economy against the risks of hotter for longer inflation and falling consumer sentiment. It also is worth noting that since employment is a lagging indicator, the June jobs report does not eliminate the risk of a recession starting soon. However, with such robust labor demand, it does suggest the next economic downturn could be a relatively mild one for American workers. For now, the Fed should take the jobs report as a positive and remain focused on the inflation half of its dual mandate. Next week’s CPI report will be key to watch and should support another 75 bps hike this month. 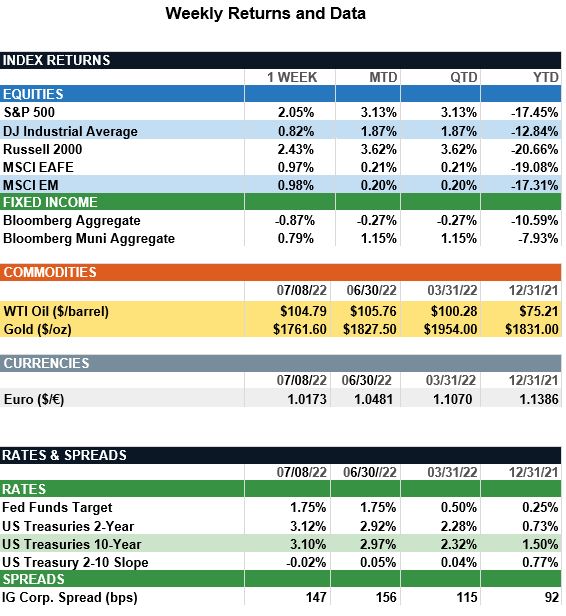