Overview: Stocks across the globe finished higher last week, as investors anticipate a winding down of the Federal Reserve’s aggressive rate hikes. The Fed made its second consecutive 75-basis-point (0.75%) interest-rate hike last week, bringing the funds rate to a range of 2.25-2.50%. In addition, the Fed indicated future hikes will be data-dependent and determined on a meeting-by-meeting basis. In the U.S., the S&P 500 index ended the past week up 4.3% as earnings optimism helped drive stocks higher. U.S. earnings results have generally remained above expectations in the second quarter of 2022. According to Goldman Sachs data, 56% of companies have reported second-quarter earnings. 52% have beaten consensus earnings estimates by more than one standard deviation, above the historical average of 47%. In economic data last week, the first estimate of second-quarter Gross Domestic Product (GDP) was released. The U.S. economy shrank by more than expected to -0.9% annualized for the second quarter of 2022, primarily on slowing investment and spending, along with a decrease in inventories. This was the second consecutive negative GDP quarter, meeting an informal definition of recession (see further detail below). As the inflation watch continues, the Fed’s preferred inflation measure, the core personal consumption price index (core PCE) rose 4.8% year-over-year in June. This was above last month’s 4.7% reading, but lower than the high of 5.4% reached in February, given markets hope that inflation has peaked.

Update on Gross Domestic Product (GDP) (from JP Morgan): Real GDP fell 0.9% in 2Q, marking the U.S. economy’s second consecutive quarter of decline. Weakness was broad-based with slowdowns in inventory rebuilding, residential and non-residential construction, and capital spending. This was marginally offset by gains in consumer spending and trade; however, with higher inflation eroding Americans’ purchasing power, higher mortgage rates slowing down the housing market and a higher USD hurting exports, growth likely is to stay subdued this year. While two consecutive quarters of negative GDP growth may lead some to jump to the term “recession”, we are not there yet according to the definition used by the National Bureau of Economic Research (NBER), the de facto scorekeepers of U.S. recessions. NBER’s definition is much broader, encompassing declines in employment, industrial production, household income and trade. Take employment as the prime example here. In 2Q, we saw average nonfarm payroll growth of 375K/month while the unemployment rate held at 3.6%. This strong of a labor market seems to contradict NBER’s definition. However, it will be important to monitor the labor market in 2H22 to look for any signs of deterioration and the possible start of a recession. While the gloomy GDP print will reinforce pessimism concerning the health of the U.S. economy, it does present a slight silver lining. The growth slowdown in 1H22 shows the Fed’s aggressive hiking cycle is delivering on its intended consequences – higher rates are slowing demand and growth, which should help alleviate some inflationary pressure in 2H22. 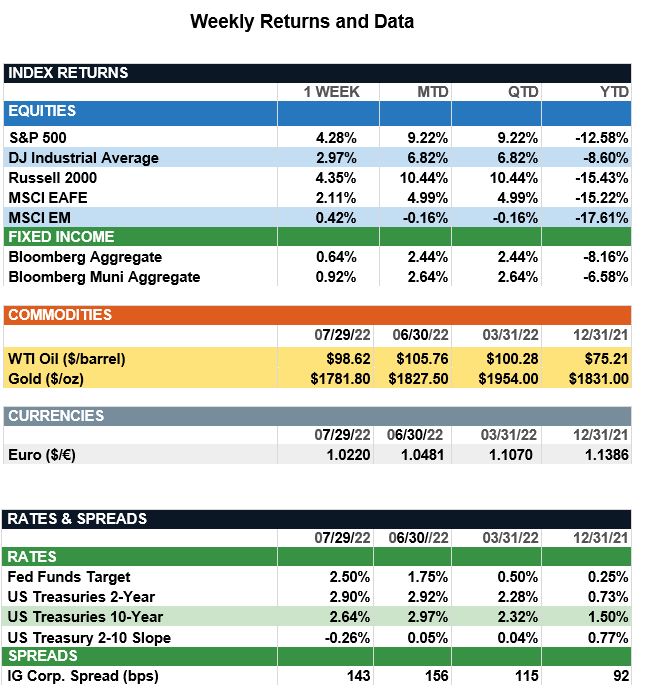