Overview: Stocks in the U.S. traded sharply lower last week as investors became increasingly skeptical the Federal Reserve will be able to tame inflation without causing a significant slowdown in the economy. Most of the market’s moves came at the end of the week, as hawkish messaging from Federal Reserve Chair Jerome Powell at the Jackson Hole Symposium on Friday signaled higher rates to help curb inflation. The S&P 500 slid 3.4% on Friday, dipping below its 100-day moving average (a closely watched technical level), and finished the week lower by 4.0%. Bond yields moved higher as the yield curve continued to invert, with the yield on the 2-year and 10-year Treasury notes trading at 3.39% and 3.03%, respectively. According to Fed Watch data, futures markets now are pricing in about a 65% probability of a 0.75% (75 basis point) rate hike at the Fed meeting next month. On the data front, key reports for the week include the JOLTS job openings on Tuesday, followed by ISM Manufacturing on Thursday, and the employment situation on Friday. Economists are expecting the labor market to show an increase in nonfarm payrolls by about 300,000 in August, coinciding with an unemployment rate of 3.5%.

Update on the Fed (from JP Morgan): On Friday, Federal Reserve Chairman Jerome Powell reiterated inflation remains too high and the central bank is determined to bring it back down to its 2% target, even if they must risk weakening the economy in the process. Chair Powell specifically noted “reducing inflation will require a sustained period of below-trend growth.” This tough talk comes just as we have begun to see an improvement on the inflation front. The July CPI report showed headline CPI remaining unchanged m/m and a notable deceleration in y/y growth. Looking ahead to the August report, declining gasoline prices and lower airline fares should provide additional relief, but the rest of 2022 could be mixed with natural gas prices rising and higher wages putting a floor underneath inflation. Nonetheless, we expect inflation will resume its decline in 2023, as weakening demand and improving supply chains ease price pressures. For the Fed, the key question is whether the current path to 2% inflation is quick enough. The path to normalcy will be slow and could vary greatly depending on the economic backdrop. Even in a scenario in which headline CPI grows at a consistent 0.2% m/m rate, the y/y growth figure would take a full 12 months to come down to just above 2%. 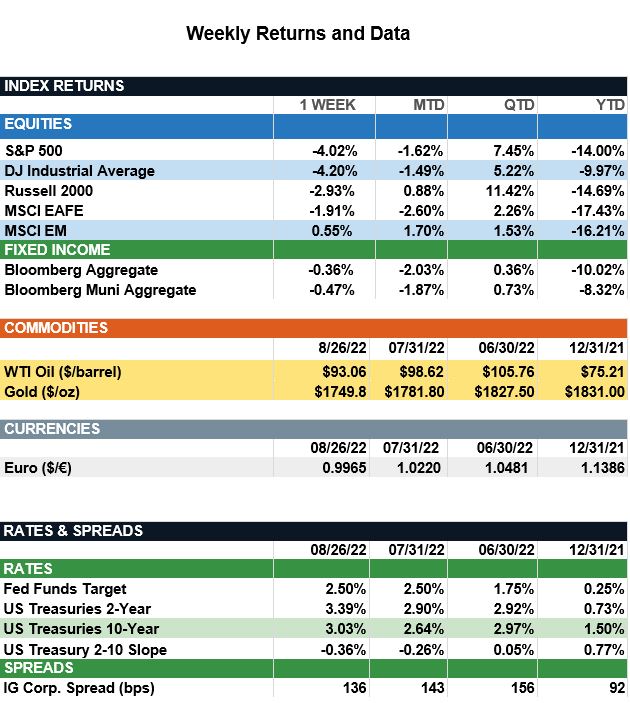