Overview: Stocks were higher across the globe last week as volatility in the markets remained elevated. In the U.S., the S&P 500 index finished the week 1.6% higher, as investors hoped for a sooner-than-expected reversal in the Federal Reserve trajectory for interest rates. International stocks followed the overall positive trend for the week, with both international developed (MSCI EAFE) and emerging markets (MSCI EM) up 1.9% and 2.5%, respectively. In the energy markets, oil prices were up sharply last week as OPEC+ agreed to cut production by two million barrels per day, the largest reduction since 2020. The benchmark WTI oil price closed the week at $92.64, up over $13 per barrel for the week. In economic data, the U.S. ISM Manufacturing Index fell to 50.9, its lowest level since May 2020. This ISM Index is a leading indicator for the level of economic activity in the manufacturing sector in the U.S. and slowing manufacturing data has contributed to concerns for economic growth. Bond yields have risen recently on growth concerns, with the 2-year and 10-year Treasury yields both rising on the week to 4.31% and 3.88%, respectively. Federal Reserve officials continue to state their commitment to taming inflation while keeping an eye on data. One key indicator for the Fed is the labor market, which remains strong. In the monthly jobs report released last Friday, payrolls rose 263,000, above expectations. Meanwhile, the unemployment rate fell from 3.7% to 3.5%, partially due to a decline in labor force participation. This week, focus will be on the Thursday consumer price index (CPI) report, with headline inflation expected to fall to 8.1% for September, down from 8.3% in August. 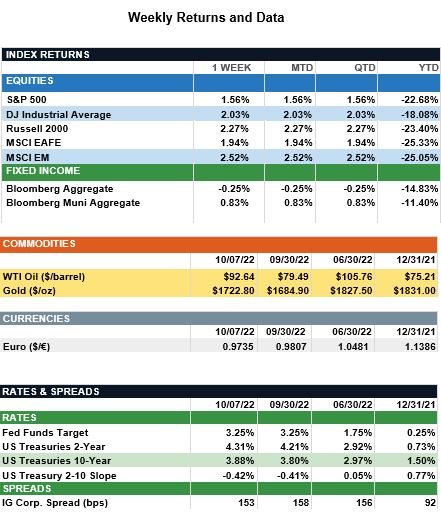