Overview: Stocks across the globe finished higher last week, led in the U.S. by the S&P 500 index, which rose 4.8% on a solid start to the third-quarter earnings season. In the bond markets, market pricing of Federal Reserve policy expectations has continued to put pressure on interest rates as investors react to the Fed’s commitment to aggressive monetary policy to fight inflation. The 10-year Treasury note traded at 15-year highs during the week, finishing at a yield of 4.21% as market expectations now are for an almost certain 0.75% (75 basis point) hike in rates at next week’s Fed meeting, and with expectations of a further hike in rates to around 4.5% by year end. Looking ahead, key data this week will be released on Thursday with the first look at third-quarter Gross Domestic Product (GDP), with consensus expectations for a 2.3% increase for the quarter, vs. -0.6% for the previous quarter. Friday (Oct. 28) we will get data on personal consumption and the PCE Price Index, which is the Federal Reserve’s preferred measure of inflation. Headline PCE is expected to rise from 6.2% to 6.3% on an annual basis, with the core PCE expected to increase from 4.9% to 5.2%. These key growth and inflation metrics will be closely watched by investors and any deviations likely will influence markets direction. 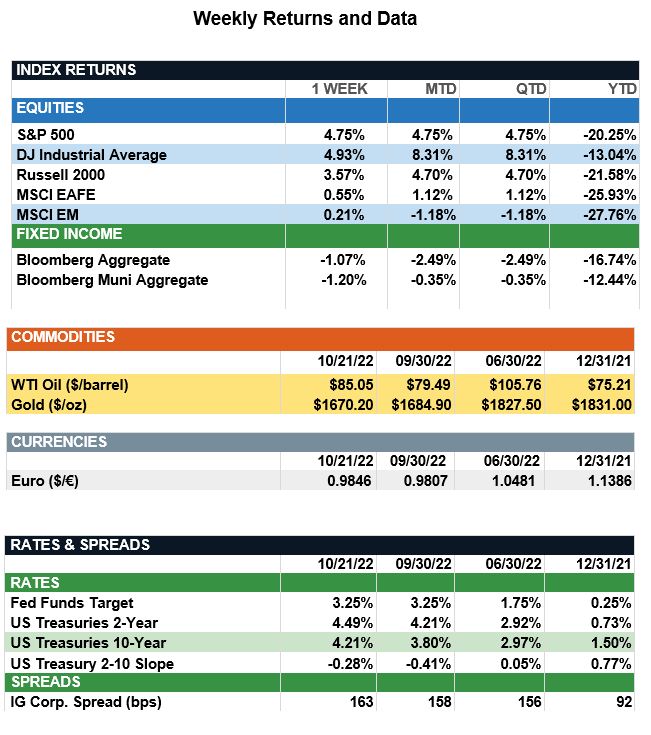