Perspective on Late January Sell Off

Stocks in the U.S. continued to decline this week following three consecutive weeks of negative performance. On the heels of last week’s nearly 6% decline, the S&P 500 has officially entered correction territory, which is defined as a 10% drop from recent highs. In addition, the CBOE Volatility Index (VIX) reached a level of 36 – its highest since November of 2020. Known as the market’s “fear gauge,” the VIX index measures real-time expectations for volatility over the coming month. Tensions between the West and Russia over the military buildup on the border of Ukraine coupled with uncertainty surrounding the Federal Reserve’s monetary tightening appear to be at the root of investor angst.

The U.S. State Department announced on Sunday it was ordering diplomats’ family members to leave Ukraine, as U.S. President Joe Biden weighed options for boosting America’s military assets in Eastern Europe to counter a buildup of Russian troops. On Monday, the North Atlantic Treaty Organization (NATO) said it was reinforcing eastern Europe with more ships and fighter jets. Following a series of deployments announced by alliance members in recent days, Secretary General Jens Stoltenberg said NATO would “continue to take all necessary measures to protect and defend all allies, including by reinforcing the eastern part of the alliance.” (Reuters). While Russia denies planning an invasion (despite having amassed approximately 100,000 troops around Ukraine), recent moves by NATO indicate that the West is preparing for Russia to wage an attack on its neighbor. The prospect of a Russian attack on Ukraine quashed demand for riskier assets such as stocks and bolstered the U.S. dollar and oil. The ruble hit a 14-month low against the dollar, and Russian stocks and bonds have faltered.

In addition to the uncertainty surrounding Russia and Ukraine, the Federal Reserve’s policy meeting will conclude on Wednesday. Investors have been paying particularly close attention to the Fed in recent weeks as the central bank tries to navigate surging inflation. Expectations are for the Fed to point towards an end to quantitative easing and an increase in interest rates at their meeting in March. Moreover, Fed Chairman Jerome Powell may also shed some light on the potential timing and pace of quantitative tightening. In response, Fed funds futures are now pricing in a total of 4 rate hikes by year-end, with the first coming as soon as March. The Fed has made clear that combating inflation is a top priority, and interest rates have risen in response. So far this year, the yield on the 10-year Treasury note has risen by more than 25 basis points (0.25%).  However, we’ve seen this trade lose steam as escalating geopolitical tensions have boosted demand for safe-haven assets like U.S. government bonds, effectively putting downward pressure on interest rates. 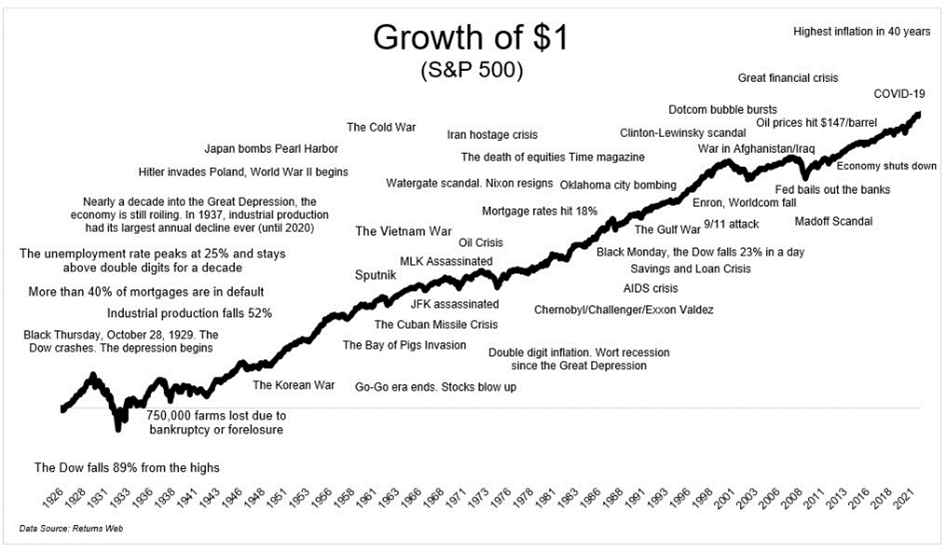 Going forward, we can expect these developments to continue weighing on the markets until there is some sort of resolution and clarity on the potential outcomes. Throughout history, investors have always been confronted with volatility and subsequent selloffs. This chart above https://theirrelevantinvestor.com/2022/01/24/reframing-volatility/ highlights some key events that the markets have endured throughout history. As you can see, despite no shortage of reasons to panic, investors who are able to drown out short-term noise have been consistently rewarded time and time again. The rest of this week features a jam-packed calendar of high-profile corporate earnings, with roughly 20% of S&P 500 constituents posting earnings. Over the long-term, earnings are a much more important driver of market returns and we continue to stay focused on long-term fundamentals. In the meantime, we continue to focus on more attractively valued areas of the market, such as value and international stocks.